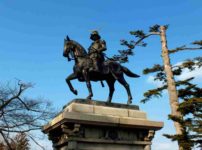 If you travel in the Tohoku region, why not stop by Sendai, the largest city in the region? Sendai City has a population of approximately 1.08 million. It is the political and economic center of the Tohoku region. At the same time, it is a town with a history that was governed by the Date family, one of Japan's leading daimyos, for the last 300 years from the 16th century. At Sendai Castle, a popular tourist spot, the statue of Date Masamune, one of Japan's strongest Sengoku Daimyo, is still watching over the town. Outline of Sendai     Wonderful winter illumination The Sendai Pageant of Starlight, one of the famous winter illumination events in Tohoku region and Japan. The venue for event is Jozenji avenue which is the main street of Sendai = Shutterstock From early to late December every year, an illumination called "SENDAI PAGEANT OF STAR LIGHT" is performed at Jozenji Avenue, a main street in Sendai city. At this time, about 160 large Japanese zelkovas will be decorated with 600,000 light bulbs. Sendai City is often below freezing at night in December, but at Jozenji Avenue, it is full of lovers and families.     I appreciate you reading to the end.   Back to "Best of Miyagi" 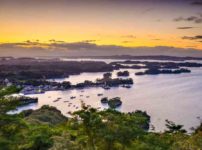 If you travel for the first time in the Tohoku region of Japan, I think that it is a good idea to go to Miyagi prefecture first. Miyagi Prefecture has Sendai City, the biggest city in Tohoku. You can enjoy delicious dishes from all over Tohoku in this beautiful city. Matsushima Bay spreading northeast of Sendai City is famous for its scenic beauty. You can travel around the world as seen in the picture above by ship. This area called Sanriku was hit hard by the Great East Japan Earthquake that occurred on March 11, 2011. Still, people adore the sea which gives them many blessings and live with the sea. Outline of Miyagi Morning of Shimotsu bay Minami Sanriku-cho = shutterstock Map of Miyagi Miyagi prefecture is located on the Pacific side of the Tohoku region, and its west side is in contact with the Ou Mountain Range. It is about 350 km north of Tokyo. Miyagi prefecture has a population of approximately 2.3 million people and has become a center of the Tohoku region since long ago. The center is Sendai City. Nearly half of the people in Miyagi prefecture live in this city. Along the Pacific Ocean in Miyagi prefecture, deeply indented coastline continues. This area has been hit by a big tsunami when a large earthquake arrives from long ago. However, there are many fish and shells living in the deep bay, giving us a wealthy blessing. Climate and weather in Miyagi Prefecture Matsushima Bay in winter, Miyagi prefecture, Japan = shutterstock ...