If you want to go to a beautiful traditional village in a heavy snowfall area in Japan, add Shirakawago (Gifu Prefecture) to your itinerary. Shirakawa-go is a village registered as a World Heritage Site along with Gokayama (Toyama Prefecture) in the same area. In Shirakawa-go, you can experience how the residents have worked together and survived in a harsh natural environment. In winter you can experience the world of heavy snowfall. This village is very popular, so it is advisable to book your accommodation in the village early.

Shirakawago is the name of the area around the Shogawa River in Gifu Prefecture. However, recently, it often refers only to Shirakawa village, where many traditional Japanese houses are preserved. On this page, I would like to introduce you to the Ogino area, which has many traditional houses in Shirakawa Village.

Shirakawago is located in the mountainous area of northern Gifu Prefecture in central Honshu (Chubu). In this region, there is a great deal of snow in the winter. Villagers have been devising various ideas for a long time so that they can live in such heavy snowfall areas. The most characteristic feature is the Gassho-zukuri roof.

Gassho-zukuri is a house made of wooden beams combined with a steep thatched roof. This area is one of the most heavy snowfall areas in Japan, but because of the sharp roof, snow slides off the roof. It was designed to prevent the house from collapsing no matter how much snow it accumulates.

In Shirakawa-go (Gifu Prefecture), a traditional village that has been registered as a World Heritage Site, you can enjoy beautiful autumn colors and snow in winter. In Shirakawa-go, the first snow falls around the middle of November. In late December, you can see the pure white world like the pictures in ...

Shirakawago, a traditional village located on the mountainous area of Honshu Island, offers beautiful snow views in winter. From late January to early February, as in the first photo of this page, the village will be beautifully illuminated. In Japan, beautiful snow scenery can be seen in Hokkaido and mountainous regions ... 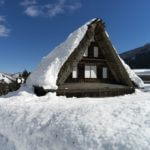 If you go to Shirakawago Village, a world heritage site in the Hida region in Japan, stop by Takayama located nearby. Takayama is the center of the Hida region. Here you can stroll through the old streets. You will feel old Japanese life that has already been lost in Tokyo and ...

Back to "Best of Gifu"